Thank you for visiting our site. We hope you will join us as we share with you the healing remedies and organic living methods we employ. Along the way, we’ll show you budget-conscious renovations and decor solutions for your home.

We believe you can have a beautiful home and gardens no matter your budget. We’ve created the home of our dreams and we’ll help you create the gracious home of your dreams too.

When we purchased our home, I was concerned with the “bones” and knew everything else could be fixed. The foundation was solid and that’s about all that was. It seemed like every surface in the house needed attention. We will share with you the budget-friendly updates that we’ve done along the way.

My husband Jon and I hope you’ll join us, and our sweet German Shepherd rescue, Simon, on this journey. We will fix the problem areas in our home and garden and we’ll learn about growing organic food. 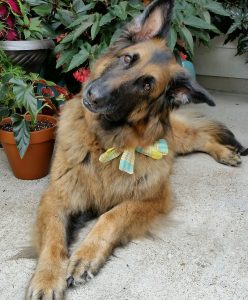 Simon came to live with us when he was eight months old and is eleven years old now. Time sure flies!

He had been badly abused and neglected. He was still just a pup, albeit a large one, and was so emaciated that I didn’t think he would live through the night.

It took several weeks to restore his appetite and several months to restore his health. He is so sweet and has such a sense of humor, he’s always on the prowl for his next opportunity for pranks and mischief!

Jon owned a commercial landscape maintenance company and nursery before we opened the doors of our Laser printer service and imaging supplies business.

Jon was a Texas Certified Nurseryman and held a tree, lawn & ornamental pest control license. He is also a licensed Texas real estate agent who is very handy with a hammer and saw. 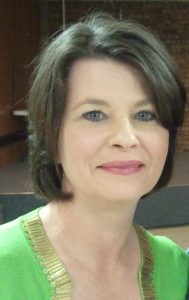 I am a trained court reporter, hold a paralegal degree and a Texas real estate license. I met Jon while working at his landscape company and commercial nursery.

I had a lot of experience in landscape architecture drawing designs for clients. Most of my early horticulture experience came from the many hours I spent running the commercial nursery.

I can’t walk into any building or garden without it getting a subjective remodel.

In 2007 I was diagnosed with multiple sclerosis and the trajectory of my life was changed in an instant, as was Jon’s. It began in April of that year when I started noticing I couldn’t read anything. Print, street signs, everything had the middle missing out of it. I went to the eye doctor who examined me and promptly referred me to a neurological ophthalmologist. I went from thinking I need new glasses to a deflating punch in the stomach.

The neurological ophthalmologist ran tests including an MRI and determined that I had optic neuritis. He told me that there was a strong possibility of multiple sclerosis and that if I had another occurrence of this that it was, in all probability, MS. My vision returned to normal within a few weeks and all was well, or so I thought.

So began the dog days of summer and one of the worst days of my life. I woke up one morning in August to horrible pain in my eyes. I couldn’t move them without agonizing pain. Throughout the day the pain got worse but I took my mother grocery shopping and as I was standing in front of the well-lit dairy case, it was like a flash bulb went off in my face. I told Mom, “I think I have MS.”

By the following day, my vision was completely gone in my left eye and severely impaired in my right eye. This lasted for six weeks and slowly my vision returned, by the abundant Grace of God!

The doctor ordered another MRI and it showed more than 20 lesions in my brain, some of which were in the Dawson’s Fingers formation. It was official, it was multiple sclerosis.

For the next five years I went through some grueling treatments from interferon injections, to bimonthly immunoglobulin infusions and everything in between. The effect of these harsh chemo-type treatments had me in the nephrologist’s office twice for kidney problems, all due to the drugs prescribed to “help” the MS, which were slowly killing me.

Jon was watching me decline to the point he began researching alternative treatments. He was troubled at the rate I was going downhill, and I was too sick to care. This is when, at Jon’s urging, I stopped all conventional treatments.

Jon had been doing a lot of research and prayer for alternative treatments. God, through His infinite mercy, led Jon to research Low Dose Naltrexone (LDN) which showed very promising results.

We found a new and wonderful neurologist that actually listened and cared. Jon presented the evidence for Low Dose Naltrexone (LDN) to him and he agreed to prescribe it for me on a trial basis. That was in 2012 and I have been healthy have had no exacerbations (and ZERO side effects) in the seven years I’ve been taking it.

Through this journey of all the tests, treatments, doctors and medications we’ve learned a lot of good remedies and lessons which we’ll share to help anyone that desires to have a healthy and happy life – a life well-lived.

We look forward to sharing the journey with you and  hope you enjoy your visit here at Prairie Dog Hall. Come back again soon!

God bless you and yours,

You can find out more about which cookies we are using or switch them off in settings.

This website uses cookies so that we can provide you with the best user experience possible. Cookie information is stored in your browser and performs functions such as recognising you when you return to our website and helping our team to understand which sections of the website you find most interesting and useful.

Strictly Necessary Cookie should be enabled at all times so that we can save your preferences for cookie settings.

If you disable this cookie, we will not be able to save your preferences. This means that every time you visit this website you will need to enable or disable cookies again.